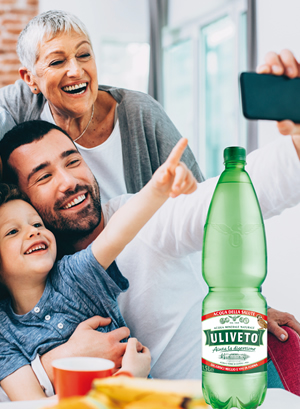 Through Decree No. 4311 of 15-7-2019, the Italian Ministry of Health recognises that «The quantity of calcium in Uliveto mineral water contributes to supplementing the daily calcium requirement for bone health».

The campaign aims to promote the benefits for bone health of the concentration of highly absorbable calcium contained in Uliveto water.
The presence of calcium is important in all stages of life, and particularly for those who have to pay special attention to this aspect of their well-being, such as women during pregnancy or the menopause.
Let’s not forget that calcium is also essential for good muscular function and bone metabolism in athletes, who are at higher risk of bone demineralisation resulting from increased metabolic use and a greater loss of calcium through sweat.

The study “Calcium intake in bone health: a focus on Calcium-Rich Mineral Waters (Vannucci et al. Nutrients 2018)” conducted on a sample of young women, further confirmed that a calcium-rich water such as Uliveto is a good and valuable source of calcium and, being a mineral water, calorie free.

As confirmation of its commitment to this topic, Uliveto is supporting World Osteoporosis Day, in partnership with FIRMO - the Italian Foundation for Bone Disease Research.

The campaign comprises the following: