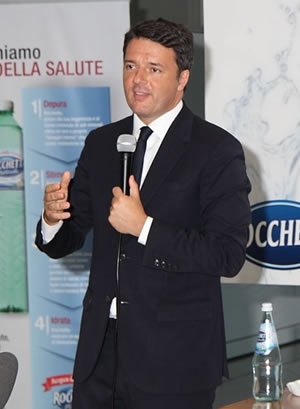 Together with Infrastructure Minister Graziano Delrio and the President of the Region Catiuscia Marini, Mr. Renzi was welcomed by the CEO of the Uliveto-Rocchetta Group Mr. Bigioni and the Mayor of Gualdo Tadino Massimiliano Presciutti for a tour of one of the most important production sites in the region: “a high-quality business at both national and international level, a benchmark for Italy that invests in safety, control, quality and technology but above all in human capital”, acknowledged Renzi.

After a tour of the plant, the Prime Minister was able to observe the professionalism of the entire Uliveto-Rocchetta Group workforce as well as verify the levels of excellence attained in the bottling of Italy’s most famous Umbrian water.

“We are honoured to receive the Prime Minister and to know he supports our continuing investment in the region”, commented Mr. Bigioni, CEO of the Group which, with the Uliveto, Rocchetta, Brio Blu Rocchetta and Elisir di Rocchetta brands, the Rocchetta teas and the Linea Benessere range, is a leader on the Italian still, sparkling and flavoured and functional waters market as well as in the fruit beverages and ready-to-drink tea segment.

The Rocchetta plant in Gualdo Tadino (Perugia) was constructed in 1995 on
a 10,000 m2 site to host the first blow moulding machine and the first bottling line (36,000 bott./hour). The area was later extended to cover 15,000 m2, four more bottling lines were installed and the plant expanded to cover a total area of 28,000 m2.

Mr. Renzi offered reassurances to the entire management as regards the Government’s commitment to enabling workers to express themselves to the maximum, removing the obstacles that slow down Italy’s development, and expressed his hope of returning to the Rocchetta plant for the opening of the new wing, the result of additional investment by the Group.