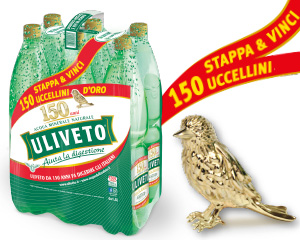 Uliveto: helping our digestion for 150 years

There is lots to celebrate because this water has grown, becoming a healthy daily habit for many Italian families. At the same time it has always remained faithful to its origins.

It all began in a little town in the Tuscan hills, Uliveto Terme, which took its name from the local spring, famous since ancient times. In fact, it is said that while travelling from Vicopisano along the road to Bientina, the troops of Frederick I were quite struck by the pleasant flavour of this water.
In the Middle Ages the water from the spring, at the time known as Bagno Antico, was famous among the locals for being a genuine remedy for tiredness, aches and pains and digestion problems. Its virtues were praised by the town’s wayfarers, making it so popular that there was talk of channelling the spring into a water network so it could be distributed to the entire population.
In 1835 Dr. Giuli outlined the health benefits of Uliveto water in a book, which would then be revisited in around 1900 by illustrious Italian clinicians such as Grocco, Fedele and Zoja.
Thanks to the extension of the water system, in the second half of the 19th century the splendid Terme di Uliveto spa was opened.

Today the Uliveto spa is a cutting-edge structure with completely automated management and maximum focus on hygiene. The characteristics of the water are guaranteed by 1500 daily quality control checks. Only in this way can we ensure that the water on your table is just like the water that flowed from the spring 150 years ago. Water that helps you to digest and stay healthy.