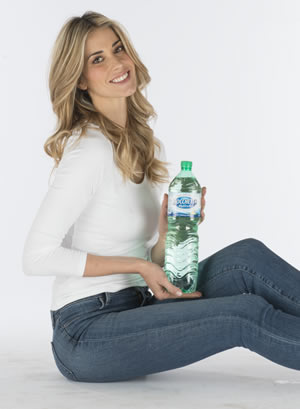 Rocchetta has a new face in 2017: Elena Santarelli. There is a natural bond between the water of health and the showgirl, the epitome of a beauty that is able to reconcile her professional and private lives.

Elena Santarelli has two children. She began her career as a model, winning the Italian Elite Model Look competition. She has partnered Amadeus on the small screen and Paolo Bonolis at the cinema. She has presented successful programmes such as Total Request Live, Glob and Plastik. On the social media, she is one of the most-followed Italian women: her Instagram profile has over a million followers.

Her fresh and modern beauty will be associated with Rocchetta throughout the year with a TV, radio and press campaign. She will also appear on the new packaging and the social media. A new image but no change to the historic claim: “Pure on the inside, beautiful on the outside”.

Another classic partnership is the association with Uliveto. In a series of ads, Elena Santarelli and Rocchetta will appear alongside Alessandro Del Piero.